With the LUKS configuration achieved at this point, there will be two different passphrase prompts during boot: one from GRUB, and the other from systemd. Once GRUB unlocks the LUKS partition, it loads the kernel and initramfs on it, so the initramfs can start systemd to complete system boot; however, GRUB cannot pass the passphrase or the unlock state to systemd, so to systemd, the LUKS partition will still be locked. 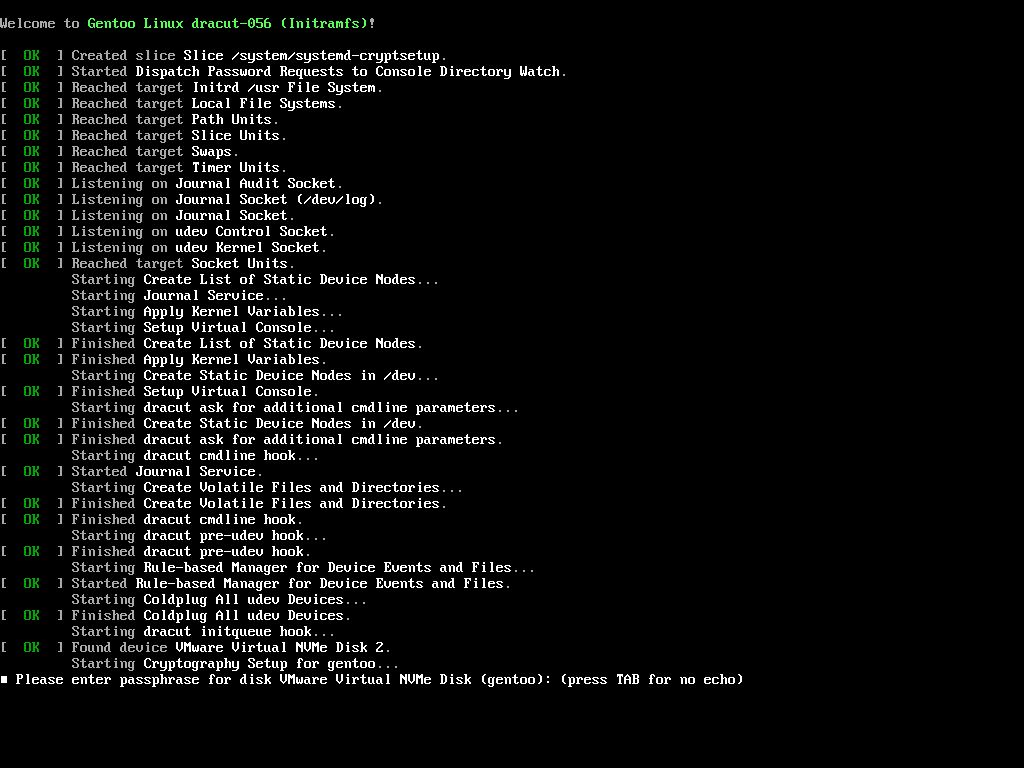 Having to enter the same passphrase twice during boot degrades the user experience. To solve this problem, a key file can be created and added to LUKS. The key file will be accessible by systemd during the initramfs stage, and systemd can use it to unlock the LUKS partition without asking for a passphrase.

For the sake of security, the key file must be a unique file. Do not use files that can be easily replicated or acquired by someone else as a key file, such as simple plain text files and music files. Use of a new, randomly-created file is recommended. The following commands allow such a file to be created and added to systemd’s standard location for LUKS key files – /etc/cryptsetup-keys.d:

The key file’s security is pivotal to the security of data on the LUKS partition. It shall be treated in the same manner as SSH private keys and PGP private keys. Therefore, its file permission shall be limited to root access only since unlocking a LUKS partition always requires superuser privilege.

Add the Key File to LUKS

Once the key is created and secured, it can be added to the LUKS partition. Remember that some encryption parameters, including but not limited to --pbkdf and --hash, apply on a per-key basis, so they need to be specified for the key individually again:

Set Up Automatic Unlock for systemd

To let systemd unlock and open the LUKS partition automatically, systemd must know the mapping device’s name it should use. This is specified from file /etc/crypttab.

Before populating the file’s content, the LUKS partition’s UUID is needed. It is available in the output of command cryptsetup luksDump:

Once the UUID is obtained, it can be added to /etc/crypttab, where each line represents a LUKS partition to unlock automatically and has the following fields. Fields are separated by white space.

More information about the file’s format is given in the crypttab(5) manual page.

For example, when the following content is added to /etc/crypttab, systemd will unlock the partition with UUID b8360e90-66e4-4ff5-84d1-c8e2174bf007 and make it available at /dev/mapper/gentoo, using the key file at /etc/cryptsetup-keys.d/gentoo.key since field 3’s value is -.

Ensure the Files Will Be Added to initramfs

Finally, all these files that have just been created need to be included in the initramfs. This can be done by declaring them in dracut’s configuration files, under the install_items option.